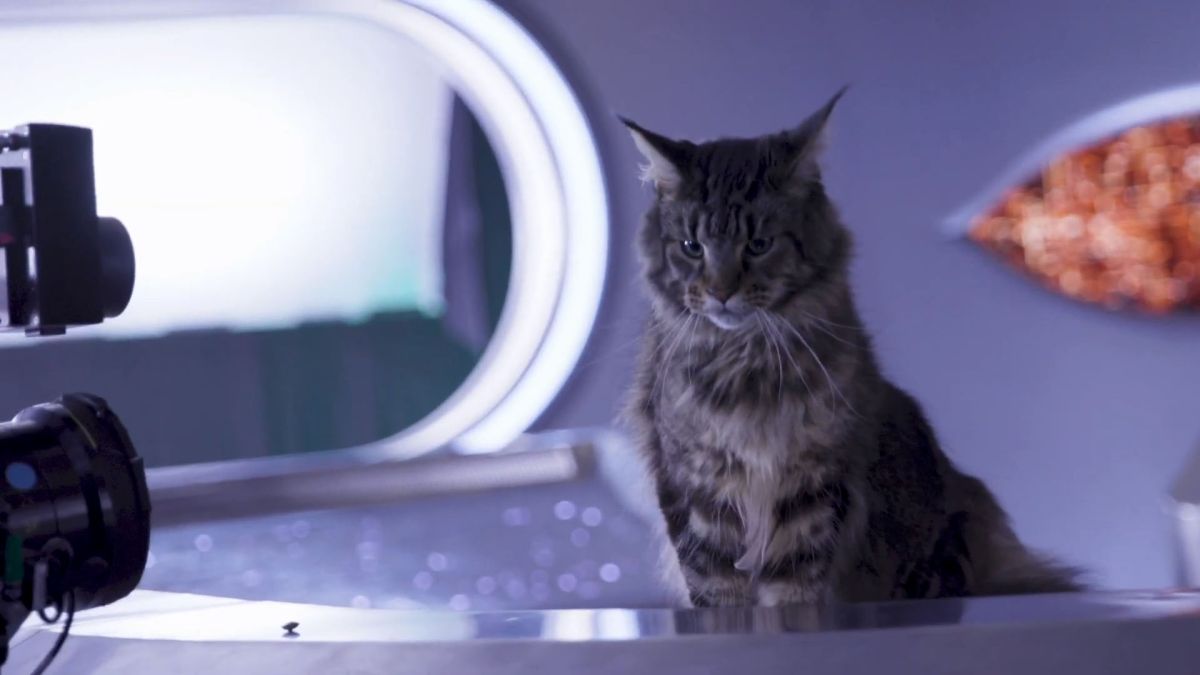 Among the many new characters that “Star Trek: Discovery” will introduce in Season 3 is one of the non-human sort: a fluffy feline named Grudge.

The cat, played by a, 18-lb. (8 kilograms) Maine Coone named Leeu, is just the latest cat star in the 54-year-old franchise — but he’s already stealing the show.

“We put out a casting call for a large cat … and he fit the bill. So far he seems to be a one-take wonder,” said Leslie Lawrence, one of Leeu’s trainers, in a short video released by CBS All Access Sept. 8.

The two-year-old Maine Coon, like any Hollywood star worth their claws, is on Instagram and Twitter so that you can follow along with his adventures. So far, the staff on “Discovery” is impressed by his stamina.

While no one mentioned it in the video, it’s likely that American Humane is making sure that Leeu remains happy and safe, as the society monitors animal safety and health on film and TV sets.

“Everybody says that their cat can make a good set cat. But it does take a specific animal to be able to stay cool and calm and collected, because when cats are done, they’re done,” Lawrence said. The staff works hard to make sure Leeu feels safe in his environment. And to get him to look at the camera, Leeu’s handlers catch his attention with tin foil and treat bags.

Leeu follows a long line of feline stars in the storied “Star Trek” franchise. Usually the first cat that fans cite is Spot, who was owned by the android Data in “The Next Generation” (1987-1994). Another starring cat was Neelix — owned by Reginald Barclay of “Star Trek: Voyager” (1995-2001).

But the “Star Trek” fan site Memory Alpha reminds us that there were many other cats; we’ll remind you of a few examples below.

Fans of “The Original Series” (1966-1968) may remember Isis, who appeared in the episode “Assignment: Earth” when the U.S.S. Enterprise goes back in time to the 20th century to meet a benevolent alien who tries to stop civilizations from destroying themselves. The cat also appeared to have powers, such as understanding exactly what the alien (Gary Seven) was saying at all times.

Chester the cat made appearances in “Star Trek: Deep Space Nine” (1993-99), first showing up with an owner named Chester before Miles O’Brien (played by Colm Meaney) took over the cat’s care. Fans of TNG may remember the crew discussing their feelings about cats in a few episodes, with William T. Riker and Geordi La Forge coming out against cats and Beverly Crusher and Deanna Troi saying they loved the species.

Perhaps the most terrifying cat of the series, however, showed up briefly in “Star Trek: The Animated Series.” A 1973 episode called “Once Upon a Planet” featured a “mechanical manifestation of an abnormally massive cat,” while the crew was on shore leave, according to Memory Alpha. Several crew members were trapped in a cave, partly out of fear of the cat doing something to them.

Let’s hope that Leeu never gets that angry.

Leeu joins an ever-more-diverse cast of actors on the show, which will include several new additions this season: transgender actor Ian Alexander, nonbinary actor Blu del Barrio, and Black actor David Ajala — the latter of whom is the owner of Grudge in the show.