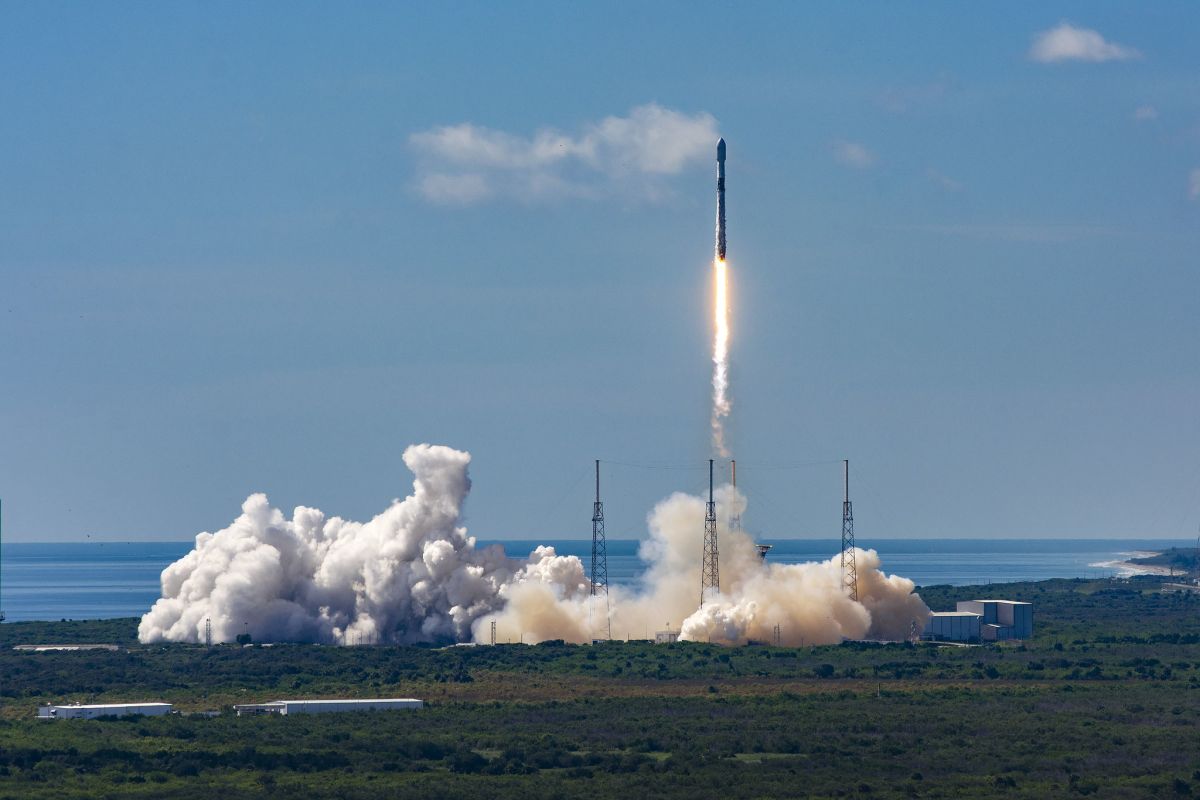 UPDATE for 2:06 pm ET: SpaceX has called off today’s launch attempt of a Falcon 9 rocket carrying 60 Starlink internet satellites due to bad weather at the rocket’s landing drone ship “Just Read The Instructions” in the Atlantic Ocean.

CAPE CANAVERAL, Fla. — SpaceX will launch another big batch of Starlink satellites into orbit for the company’s burgeoning megaconstellation today (Sept. 17), and you can watch the action live online.

The California-based company is scheduled to loft 60 Starlink internet satellites on its workhorse Falcon 9 rocket from Pad 39A at Kennedy Space Center in Florida no earlier than 2:19 p.m. EDT (1819 GMT).

You can watch the launch live here and on the Space.com homepage, courtesy of SpaceX, beginning about 15 minutes before liftoff. You’ll also be able to watch the launch directly via SpaceX.

Today’s flight, referred to as Starlink 12 by SpaceX, is actually the 13th big batch of satellites the company has shot into space. However, the company has been systematically de-orbiting its initial batch of 60 satellites that were launched in May 2019. That’s because SpaceX always meant for that initial bunch to be a test series. Thus far, 26 of the original satellites have been deorbited, eight are in decaying orbits, and 26 are operational.

SpaceX hopes to provide high-speed internet access to users around the world through the Starlink megaconstellation. By using a small terminal (no larger than a laptop), users on the ground will be able to connect to the ever-growing network. SpaceX founder and CEO Elon Musk has said that the company needs to launch between 500 and 800 satellites in order to begin rolling out service.

To date, SpaceX has launched more than 700 of the internet-beaming satellites into orbit, in an effort to fill out its planned initial constellation of 1,440 spacecraft. SpaceX has already begun speed-testing its space-based internet service, and the initial data looks promising. Company engineers have said that data collected so far indicates that the service will provide fast download speeds, allowing users to stream multiple HD movies at the same time.

The Starlink broadband internet is in a private beta-testing phase now, but it will be available for the public to start beta-testing later this year, SpaceX representatives have said.

Today’s launch marks the 94st flight overall for SpaceX’s workhorse two-stage Falcon 9 rocket.  The liftoff is expected to feature a veteran Falcon 9 first stage, designated B1058, that has two flights under its belt. This frequent flyer previously launched two NASA astronauts on a trip to the space station as well as a communications satellite for the South Korean military.

Flying previously flown boosters has become commonplace for SpaceX, as the company continues to prove the Falcon 9’s reliability. Today’s launch will mark the second time one of the company’s fleet of veteran boosters will attempt to launch and land for the sixth time.

SpaceX is both the launch provider as well as the customer for its Starlink missions, and as such has kept up a rapid launch pace this summer, relying heavily on its fleet of flight-proven boosters. In fact, this mission marks the 17th flight of 2020 for SpaceX, with Falcon 9 earning the title of most-flown American rocket earlier this year — a superlative it snagged from a chief competitor, United Launch Alliance’s Atlas V.

To date, SpaceX has successfully landed its first-stage boosters 60 times. Now that the company has two fully operational drone-ship landing platforms — “Of Course I Still Love You” and “Just Read the Instructions” — in Florida, it’s able to launch (and land) more rockets. The newer drone ship on the block, “Just Read the Instructions,” is already at the recovery zone waiting for its turn to catch B1051 when it returns to Earth this afternoon.

The weather forecast for today looks iffy; officials with the U.S. Air Force’s 45th Weather Squadron are predicting a 60% chance of favorable launch conditions. Temperatures in the area are supposed to be around 85 degrees Fahrenheit (29 degrees Celsius) with the potential for cumulus and anvil clouds.

If the mission can’t get off the ground today, there is a backup attempt tomorrow (Sept. 18). However, the weather worsens to just a 40% chance of favorable liftoff conditions, as storms are expected to roll into the area on Friday.

SpaceX will continue its tradition of recovering the Falcon 9’s payload fairing, or nose cone, on today’s flight. The company has already deployed its twin net-equipped boats — called GO Ms. Tree and GO Ms. Chief — to snag the fairings as they fall back to Earth in two pieces.

Each piece of the clamshell-like hardware, which cost approximately $6 million combined, is outfitted with software that navigates it to the recovery zone, and a parachute system that lets them gently land in the ocean or the outstretched net of GO Ms. Tree and GO Ms. Chief.

One of the pieces of the fairing on this mission has flown twice already, protecting two different Starlink payloads — one in May 2019 and one in March 2020.

Correction: This story was updated at 9:55 a.m. EDT to list the correct used Falcon 9 rocket flying on this mission.